An Ounce Of Prevention

Manny Martinez and his wife Laura thought they were buying their forever home. Now they’re afraid they may be stuck in it forever.

Just one month after moving in Martinez said he began to see problems.

He began to see cracks in the interior and exterior walls and the tile floor, the windows wouldn’t work properly, and his master bedroom door wouldn’t close.

Martinez said he called the builder and said workers came over and made repairs, but the cracks came back. The next time he called he said they sent an engineer out to investigate. That engineer said the foundation was solid, there wasn’t anything to worry about. 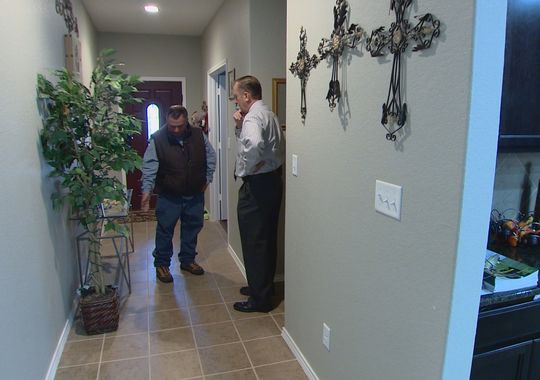 Martinez points to cracks in his tile floor, he says were caused by damage to his foundation (Photo: KENS)

Martinez said he believes there are foundation problems, which is why he called his insurance company. They sent a plumber and an engineer. The plumber ran a camera down the plumbing and Martinez said he found a major leak in a drain line. The repair meant tunneling under the house.

Pulte Group hired a contractor to do the work and repair the leaking line, then agreed to fill the tunnel under the Martinez home with a specific type of material Martinez had requested. When the contractor began pumping the material in the tunnel, the garage floor exploded and the material flooded into the garage.

That Martinez said was the last straw. Along with flooding 2 to 3 inches of the material into the garage, spilling onto everything there, it also made a huge rise in the garage floor. 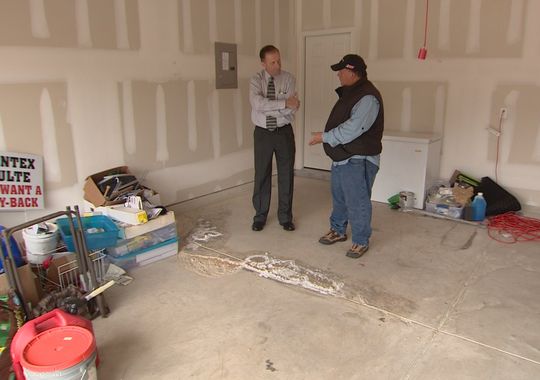 Manny Martinez points out the crystals which now grow on his garage floor. (Photo: KENS)

Martinez now wants Centex Homes, a subsidiary of the Pulte group to buy the home back. The company instead is dead set on making what it calls cosmetic repairs.

Martinez points to the 2014 Guadalupe County Appraisal on the house as proof there is major damage. He says he paid more than $230,000, but the appraisal district has the house listed as only worth just over $127,000.

Martinez said he and his attorney have tried to work with The Pulte Group’s attorney’s over the past 18 months to resolve the issue. The Pulte group said Martinez has not only turned down any of their offers to rectify the issues, he has refused to allow them to make any repairs.

The case is more than likely headed to court. Below is the complete statement from Pulte:

Centex has been responsive to this homeowner’s concerns and had third-party engineers inspect their home multiple times. The engineers all confirmed that while there is distress from settlement and seasonal moisture changes, the issues are entirely cosmetic and the home’s foundation is in good structural condition. We have offered to make all cosmetic repairs, perform drainage improvements and more. While the company has a long history of standing behind the quality homes it builds, the homeowners have repeatedly refused the repairs.